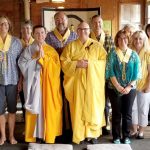 Professed lay practitioners are full members of the worldwide Buddhist religious order, whom, while not being professed clergy, nonetheless live life by vow in close relationship, and in sympathy with the character of those professed. As such, these laity do not constitute a separate religious body, but are considered an extended part of the monastic community.

There are two levels of commitment on the Lay Path:

Lay Profession (Upāsaka/Upāsikā)
The Upāsaka/ikā, as an extended member of the monastic community, shares in the life and character of the professed monks, without the additional formational commitments inherent to be being professed as clergy. Upāsaka/ikā candidates are required to have completed the WLHZ 1-Year Lotus Root Training, attend weekly communal practice sessions, and make their Three Refuge and Five Precepts vows, after which they will receive a Dharma name and a single stripe yellow kāṣāya of our lineage (representing their connection to the monastic sangha).

While this profession has the character of a promise of mutual fidelity on the part of both the Upāsaka/ikā and the wider four-fold community, it does not itself imply any permanent vow. In this, oblates embrace monastic discipline according to their ability, and support the monks in carrying the spirit of their mutual charism into the world. This mutual agreement is revocable on either side, but only for serious reasons.

Aspirancy Period
Occasionally, Upāsaka/ikā will seemingly be called to lives of further commitment on their spiritual journey. While not a formal stage of formation, aspirancy is a time of intentional conversation and mutual discernment, between an aspirant and the community, moderated by an appropriate Clergy Leader. While there are formal commitments during aspirancy (which unfolds over an indeterminate period of time, beginning when an aspirant formally expresses their intentions to an appropriate Clergy Leader), the aspirant will explore their spiritual, emotional, and social maturity through intentional dialogue, increased personal spiritual practice (both privately and in community), reading, and often, written reflection.

Generally speaking, in addition to already holding the vows and precepts of an Upāsaka/ikā, aspirants should be at least 18 years old and have completed their secondary education with an adequate record to enable them to later pursue professional and graduate education as deemed necessary for a professed vocation.

Diaconate Profession (Kor., 행자 Haengja / Sanskrit, Anagārika/Anagārikaya )
Having received initial approval, and expressing a desire to keep moving toward a professed vocation, an aspirant may at an appropriate time be invited to be received into the diaconate for a time of postulancy, that is, a further time of discernment. Diaconate and deacon are English terms derived from the Greek word “diákonos” which means “servant,” “waiting-person,” “minister,” and even “messenger;” it corresponds with the traditional Buddhist role of Anagārika/ya.

Anagārika/yas/deacons make a commitment to increased presence, and practice within the sangha, serving the monks in their ministering to the laity, thereby gaining unique insights that aid in clarifying their vocational aspirations. Deacons receive the Eight Precepts, and the basic daily (non-ceremonial) habit of a novice monk and are referred to as “Brother ____” or “Sister _____”. Committing for an initial period of one year; at this stage, there are several possibilities that may unfold after the culmination of the initial commitment:

Transitional Deacon:
In some cases, the postulancy will yield that a vocational calling to profession may become quite affirmatively and mutually clear, in which case they would proceed at an appropriate time to transition to the monastic novitiate. Further, it is possible that simply more time for discernment may be required on behalf of the postulant and/or the community, in which case the deacon will renew their precepts and commitment for an additional year.

Permanent Deacon:
In other cases, the postulant may realize that while they do not have a calling to monastic profession as this time, they are quite content with their practice and service within the diaconate, in which case they may petition to remain committed as an Anagārika/ya, renewing their precepts and commitment appropriately.

Temporary Deacon:
Finally, it is possible that through the initial year of postulancy within the diaconate, a deacon may discern that their vocation remains within the role and responsibility of an oblate, in which case they formally return their additional precepts, and robe, continuing honorably as an oblate.