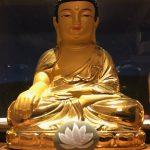 Training and spiritual guidance in the practice of dhyana (Zen) meditation, contemplation, and practice as taught by our root teacher, Shakyamuni Buddha, and as transmitted by a rich and multi-traditional spiritual lineage of ancient and contemporary Buddhist masters.

A foundational understanding of Buddhist schools (Theravada, Mahayana, Vajrayana, and Zen), and religious, philosophical, cultural, historical, and educational contexts of the Way of Buddha — drawing upon teachings found in the Pali Canon, Prajna Paramita Sutras, and the Zen Teaching Records/Commentaries of ancient and contemporary Buddhist masters.

Regular opportunities for communal participation in Zen Buddhist meditation, practice services and ceremonies within a Sangha (community) of support, where committed individuals take refuge in the Triple Gem, study and practice the teachings of the 4 Noble Truths and the Noble 8-fold Path (wisdom, ethical conduct, and mental development) and the 4 Bodhisattva Vows.

MISSION: To continually establish and promote a flourishing, non-sectarian Buddhism in the modern world in realization and continuation of the vision and work begun by our two lineage masters, His Holiness Il Bung Kyung Bo Seo (the first Korean Patriarch to the West), His Holiness Thích Thiên Ân (the first Vietnamese Patriarch to the West), and to advance the teachings of Zen Masters Seung Sahn Dae Seon Sa Nim, and Taizan Maezumi Roshi. We aim to accomplish this within the container of the transmission of traditional Buddhist Culture and wisdom practices, in a manner that is simultaneously pragmatic, scientifically, and anthropologically informed and fitting to our times.

1.) The continual establishment of a traditional, multi-yana Buddhist culture through the facilitation of open dialogue, cooperation, understanding, and respect amongst the Eastern and Western mahasangha.

2.) The continual examination of, and openness toward contemporary ideals regarding the practice of Buddha Dharma without the sacrifice of Buddhist culture, with specific regards to the harmonious embrace of science, anthropology, and allegorical and archetypal approaches to the Dharma.

3.) The advancement of gender equality within the mahasangha.

5.) The maintenance of an apolitical container for the propagation and practice of Buddha Dharma, which avoids the bifurcation of nationalism, while affirming universal sentient rights and dignity.

6.) The honoring of both time-in-grade in monastic structure, and the Zen tradition of mind-seal dharma transmission regardless of time.