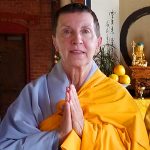 The Reverend Bo Deok (Jewel of Virtue) 보덕스님  Reverend Bo Deok serves as Sami Sunim. She began studying and practicing Buddhism in 2010. Reverend Bo Deok professed her Three Refuge and Five Precept Vows in 2015 and monastic vows within White Lotus Haven Zen of Connecticut in 2019. Bo Deok Sunim’s commitment to practice is clear and strong, and her generous heart is evident in the many ways in which she serves the fourfold sangha. 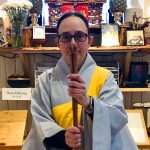 The Reverend Bo In (Jewel of Perseverance) 보인스님  Reverend Bo In serves as Sami Sunim. She became interested in Buddhist teachings while studying comparative religions in college. After graduation, she began formal meditation practice and study within the Buddhist Tibetan tradition. Over time, Reverend Bo In explored Shin, Vietnamese, and ultimately, Korean Buddhist traditions. She professed her Three Refuge and Five Precept Vows in 2016 and monastic vows within White Lotus Haven Zen of Connecticut in 2020. Bo In Sunim’s joyful perseverance and commitment to service are at the heart of her practice. 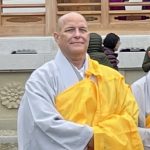 The Reverend Bo Gon Sunim (Jewel of Sincerity) 보곤스님  Bo Gon Sunim serves the community as a Sami Sunim. He was drawn to the Buddha-dharma and began formal practice in 2019. Sunim professed his Three Refuge and Five Precept Vows (2020) and Eight Precept Haengja Vows (2021) and Novice Monastic Vows (2022), in the witness of the White Lotus Haven Zen of Connecticut sangha. At the heart of Bo Gon Sunim’s practice is a deep dedication to the Triple Gem and an unwavering intention to serve the sangha and all sentient beings. 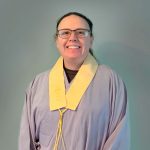 Sister Yeon An (Lotus of Ardency) 연안행자 Sister Yeon An serves as a Deacon (Haengja). She began her Buddhist practice in the early 1990’s. She professed Three Refuge and Five Precepts Vows within the White Lotus Haven Zen of Connecticut sangha in 2019, and Haengja vows in 2021. Sister Yeon An serves as a Dharma Mentor/Teacher within the Buddhist Association of the United States (BAUS) Prisoner Correspondence Course. Gentle strength, resiliency, and kindness are the fruits of her practice life, which she selflessly shares with others.