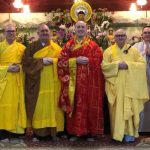 The character of monastic life derives directly from the life of the Buddha himself, who chose a path of renunciation, meditation and mendicancy in order to devote himself completely to the one-pointed work of awakening. In the Buddha’s time, when an individual was accepted into the monastic sangha, it involved leaving the “householder” life and becoming part of an itinerant sangha. As time went on, and the monastic sangha grew, the process of becoming a disciple expanded to include rules of the monastic order (prātimokṣa) and specific admission processes to ensure ethical and spiritual integrity and harmony within the immediate monastic community and the wider Fourfold Sangha (of Monks, Nuns, Laymen, Laywomen).

There are two levels of commitment on the Monastic Path:

Novice Profession (Kor., 사미 – Sami / Sanskrit, Śrāmaṇera/Śrāmaṇerī)
Should a Lay Anagārika/ya (Deacon) affirmatively and mutually discern a vocational calling to the professed life of a monk, they will at an appropriate time be invited to receive the Ten Precepts of a Novice Monk in a Pravrajya (“Going Forth”) Ceremony before an appropriately assembled quorum of (not less than five) solemnly professed monks led by a qualified lineage-holding Preceptor. During this ceremony, the candidate’s head is shaved, and in addition to the Ten Precepts, the novice-to-be receives their tonsure name, a ceremonial grey butterfly robe, and the three-fold yellow kāṣāya of our lineage. Novice Monks are addressed as “The Reverend ______”.
The novice profession entails a period of a minimum of two years (which may be extended), during which time the novice monk continues to discern their religious vocation, and to deeply experience the monastic community’s way of life so as to become rooted in mind and heart with the spirit of the Buddhist clerical order. The novitiate is a period to build resolve, commitment, and integration.

During the novitiate, the novice monk will begin to be formally mentored in the intricacies of our lineage’s liturgical tradition, alongside receiving advanced training in the skills of pastoral care considered necessary for solemn profession.

Solemn Profession (Kor., 비구 – Bigu / Sanskrit, Bhikṣu/Bhikṣuṇī)
At the completion of the initial two-year period, a novice monk will once again be examined for their resolve and fitness for professed life. It is not uncommon for the novice period to extend beyond the initial two-year commitment, and still, sometimes it is an adequate enough time period for a candidate to prepare to move forward into solemn profession. Solemn profession is known throughout the Buddhist order as Upasampadā, which literally means “Nearing the Ascetic Tradition,” which is expected to be a lifelong commitment. To enter this stage of vocational formation, the candidate must be at least twenty years old and meet a number of requirements handed down from the time of the historical Buddha. Ideally, the Upasampadā ceremony will take place before an appropriately assembled quorum of ten, or even ideally twenty solemnly professed monks (though, in exceptional circumstances, not less than five) led by three duly qualified preceptors. During this ceremony, the candidate receives the full transmission of precepts which, since the time of the historical Buddha, are revealed only to those individuals receiving them, alongside the earthen-colored robes of a Bhikṣu/ṇī, to include the five, seven, and nine-fold yellow kāṣāya of our lineage.

After solemn profession, the monk’s spiritual formation continues throughout the duration of their life, in a process commonly known in the Western world as “conversation morum” or “continual conversion of life.” Specifically, the formal education of the monk continues for a minimum period of five years (known classically in the Buddhist order as “Nissāya” or “dependence”), wherein they formally serve and study with their root teacher, engaging the disciplines of solemnly professed life, and gaining the necessary skill set to begin leading others. After this five-year period (which, again, is frequently extended), the monk may be invested as an elder and teacher (Ācārya/iṇī ), which is a formal ceremony in which the monk’s root teacher declares their stability, and competence in the monastic life to be such that supporting others is possible.

After a minimum of ten years in solemn profession, or five years after having been invested as an Ācārya/iṇī, a monk may qualify as a lineage holder (Upādhāya/ikā), and a rare ceremony would be held to declare them as such.